Are you familiar with a low country boil?

If not, no worries! You’re about to find out what it is and why people love low country boils so much!

Being a southern food enthusiast, I enjoy cooking and sharing easy soul food and southern food at its finest. And a low country boils is a southern stockpot meal with lots of my coastal Virginia home state seafood faves like shrimp, crawfish, crabs, and shellfish. This dish is often served with corn on the cob for dipping.

A low country boil is a classic hearty dish that looks as interesting on the table as it is appetizing! 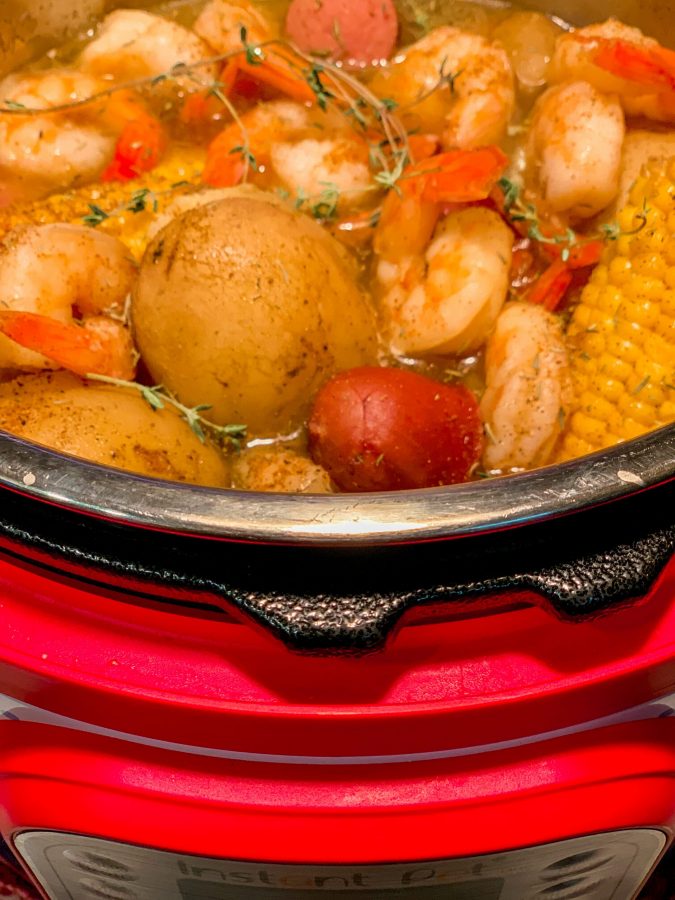 Is there any part of the low country boil recipe that doesn’t sound good?

Everything sounds like something you’ll want to taste, from the shrimp to the corn on the cob to the sausage and potatoes!

The secret seasoning that adds the classic flavor to this dish is Old Bay Seasoning, which offers a beautiful savory enhancement to the shrimp, corn on the cob, potatoes, and sausage.

Black Folks Southern Shrimp And Grits Recipe
The secret ingredient to Black folks shrimp and grits is the Southern Creole sauce! Typical to soul food and Black folks cooking, the seasonings make each recipe like none other. It's all about the spices and the special sauce.
Check out this recipe! 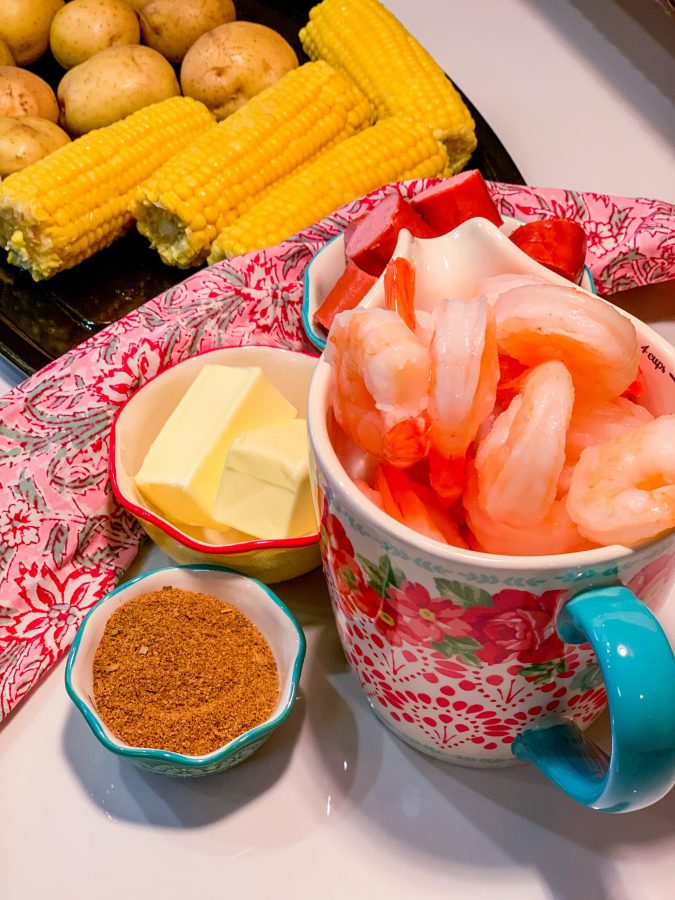 What is a low country boil?

A low country boil is a southern tradition of boiling seafood (crabs, shrimp, clams) with vegetables (corn on the cob and potatoes).

Traditionally it’s a stovetop slow cooker recipe. A combination of seafood and sausage, like andouille or kielbasa cooked in a spicy broth. The broth is seasoned heavily with Old Bay or Cajun seasoning and other spices.

Instant Pot Fesenjan Recipe
Fesenjan (affectionately called fesenjoon) is a Persian stew made with walnuts & pomegranate molasses. Yum! Another delicious dish made easy with Instant Pot!When it's pomegranate season, grab all the ingredients to make this delicious fall/winter dish!
Check out this recipe!

I love low country boils because they have all my favorite flavors – spicy sausage, tender shrimp, and sweet corn.

You won’t even need hot sauce!

No cocktail sauce is needed either! No dipping sauces are needed since the ingredients are so flavorful! And for this Instant Pot recipe, I’ve cut down the all-day or overnight simmering of a low country boil in a huge stockpot.

Instant Pot Cooking Times
How to cook with Instant Pot is one of my favorite topics!I wish everyone knew how easy Instant Pot cooking is for busy households – one-pot… straight to plate!Print my helpful Instant Pot cooking times chart to always know how long to let meats, seafood, vegetables, eggs, rice, grains, and beans pressure cook inside the pot.
Check it out!

How do you make low country boil?

With my Instant Pot shrimp boil recipe, you can make just enough of this dish for an average family of 3 or 4.

There is no need for a large stockpot, extra refrigerator storage, or waste – and the cooking time is cut down from 8 hours to 8 minutes. Wowza!

For this quick Instant Pot shrimp boil, you can use both the liquid shrimp and crab boil seasoning and Old Bay seasoning, and it won’t be too overpowering. Pressure cooking combines the flavors for a precise savor! 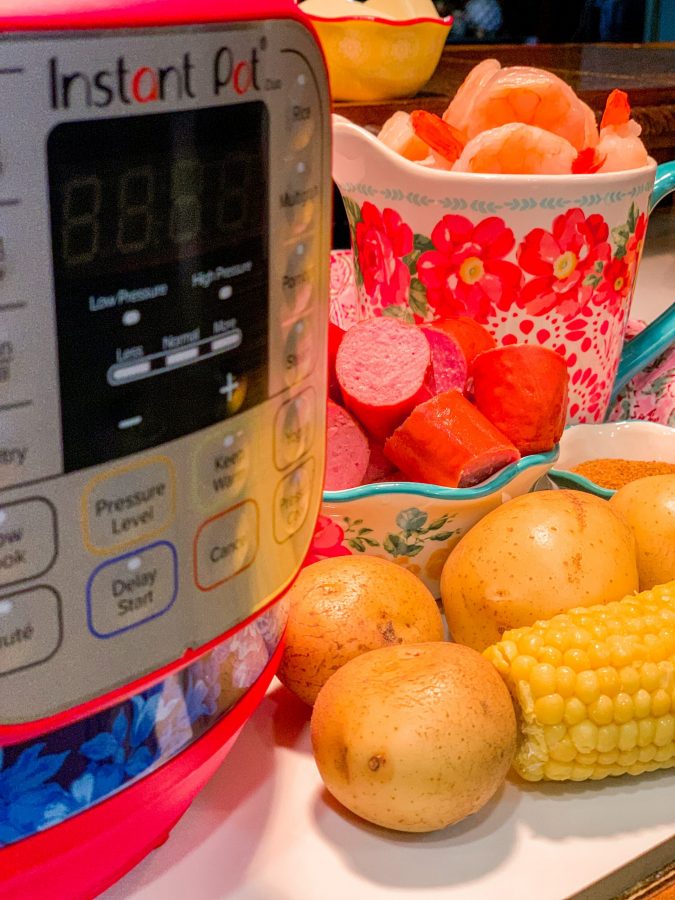 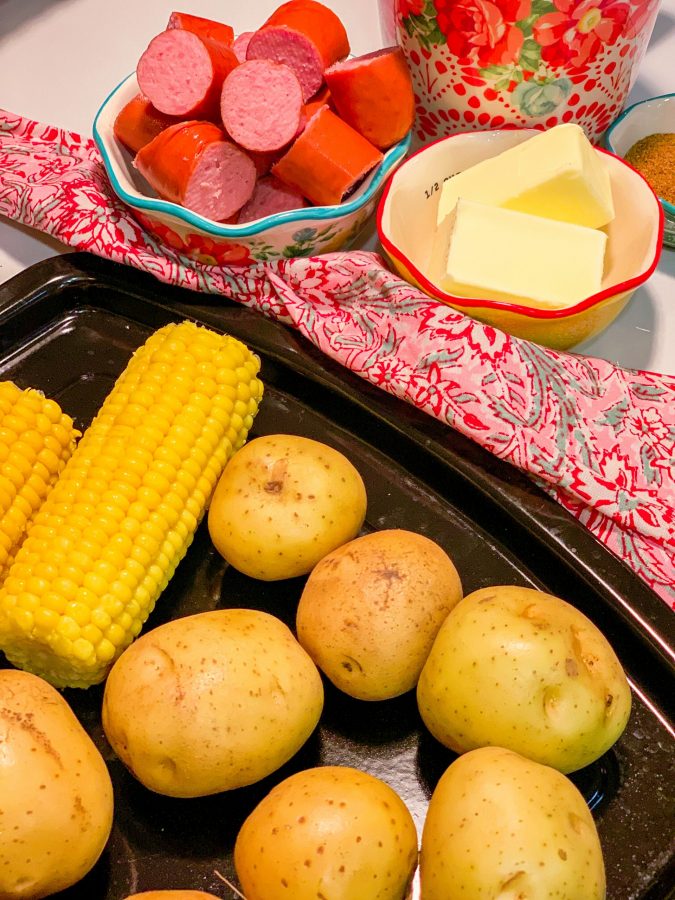 Ranch Oyster Crackers
What’s that saying? – The only thing better than ranch flavor is more ranch flavor! Here's one of the easiest homemade appetizers - ranch oyster crackers. A simple yet delicious snack made in an Instant Pot, air fryer, oven, or with a simple no-bake recipe!
Check out this recipe! 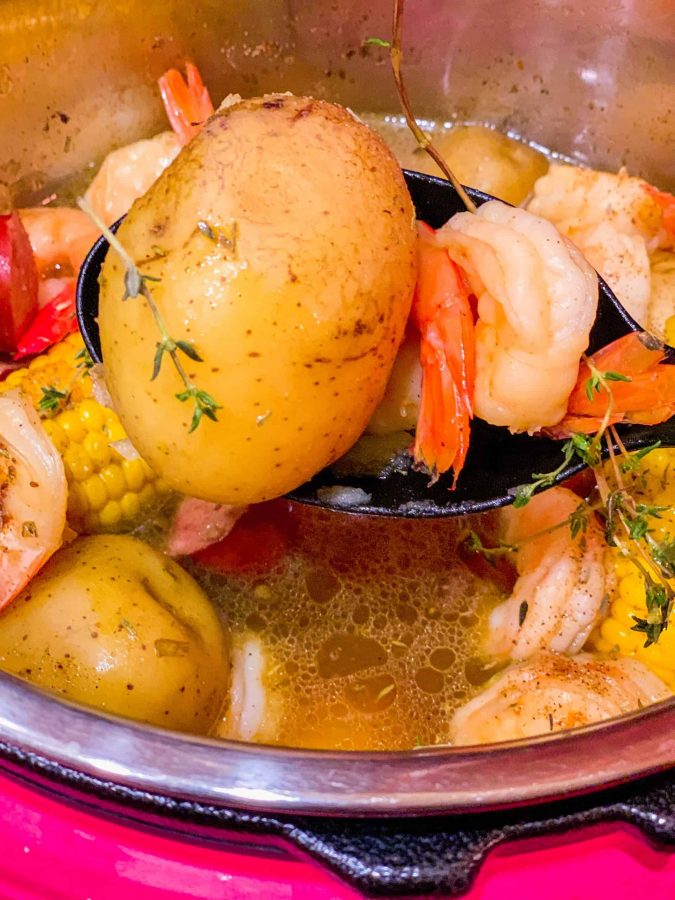 The combination of fried shrimp, sausage, corn on the cob, and red potatoes in a spicy boil is one of my favorite meals. This dish pairs well with seasoned or spicy oyster crackers or a crusty focaccia bread.

In case you struggle with what dessert to serve with your shrimp boil, I’ve listed a few you can select from.

Is a simmer a low boil?

A “low boil” is when the liquid in a pot or pan boils at an even rate to create bubbles that break the surface of the liquid.

This can be used to cook rice, pasta, vegetables, and other types of food.

A “simmer,” on the other hand, is when you want to heat liquids without boiling them over – like for making soup stock or sauces (or your favorite chili). The bubbles don’t break all the way through, so they’re more gentle than with a full-on, rolling boil.

So, there you have it! Now you know what both terms mean and how they differ from one another. 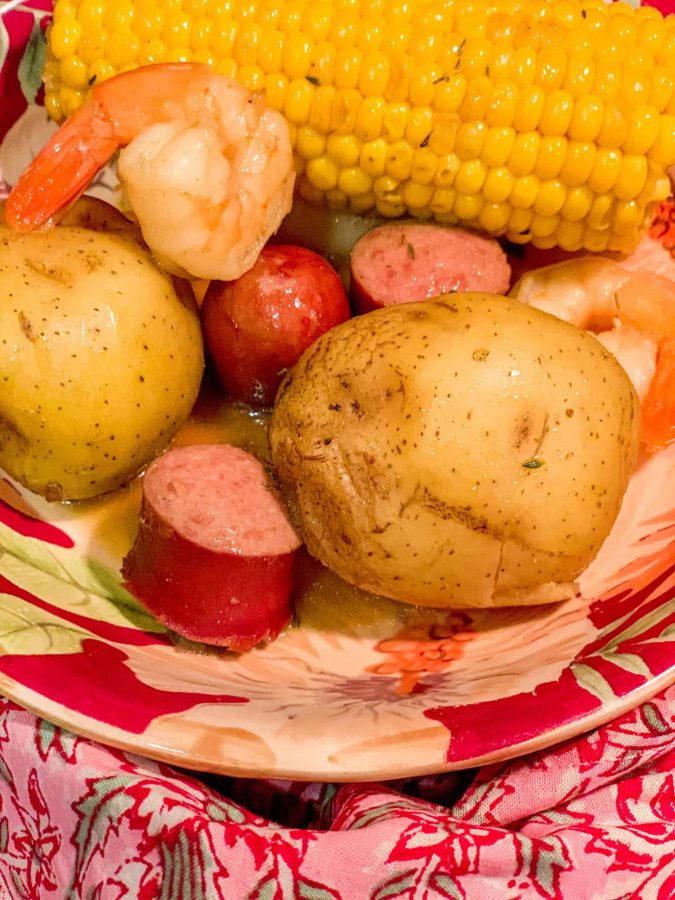 Since the low country boil is a Southern dish, you may not know that another name also knows it.

Other classic names for this dish are Beaufort stew and Frogmore stew.

There are two popular dishes in the south that people often confuse with one another because they both have the same DNA.

A low country boil is a seafood dish consisting of crab, shrimp, and other shellfish in a spicy broth. Frogmore stew (or Beautford stew) is a Southern dish made with alligator meat simmered in tomato gravy.

Frogmore stew is a traditional Southern dish from South Carolina. At the same time, a low country boil is a regional preparation of seafood. Low country boils usually include shellfish like crab claws, whereas Frogmore stew does not.

Instant Pot For Beginners
New to Instant Pot?And are you feeling not so hip to the PC (pressure cooker) lingo, terms and tips?No worries – I gotchu with Instant Pot for beginners!No more feeling like you’re not a part of the conversation while OG Instant Pot Heads seemingly talk in EPC (electric pressure cooker) code.
Check it out!

Why is it called a low country boil?

In the United States, “low country” refers to coastal areas in the southeastern region. The word “boil” comes from boiling or cooking food in water – so it’s no surprise that both dishes are cooked with boiled shrimp, crawfish, corn on the cob, potatoes, onions, and red pepper flakes.

Similar to Louisiana Creole gumbo, low country boils have a clear broth instead of a creamy base.

A low boil is an exciting thing! It looks like a simmer, but it’s not quite that either.

A lot of people would say, “a tiny little bubble.” But what does that mean? Is there any difference between the bubbles in simmering water and the bubbles in boiling water? You’re about to find out!

A low boil is typically a simmering pot of liquid with bubbles that rise to the surface and break. It doesn’t matter whether the bubbles are large or small; they always remain on top of the water. Low boils are also known as “shallow boiling.”

What do you call a seafood boil?

You may have heard it called many names, but few embody the Southern culinary experience like Frogmore Stew. It’s a mixture of seafood and vegetables that is boiled in spices for hours until tender.

With shrimp exclusively, this recipe is a low country shrimp boil. 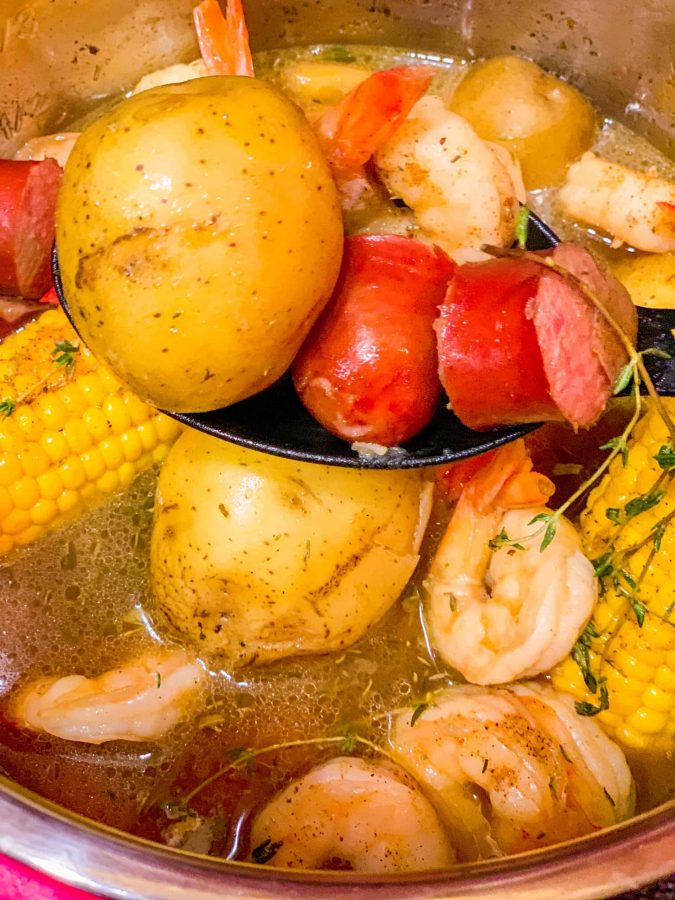 Can low country boil be stored in the fridge for a long time?

Low country boils are typically leftovers from fried seafood or boiled shellfish like crabs or crawfish simmered with vegetables in a seasoned broth.

Low country boils can be prepared ahead of time and stored in the refrigerator, so they’re ready to eat whenever hunger strikes!

How long do leftovers last?

Contrary to popular belief, there’s no need to freeze lowland boils before storing them- they’ll keep fresh for up to 3 days.

Where did seafood boils originate?

The origins of seafood boils are not definite, but there is evidence that they originated in the southeastern United States. Seafood boils can be traced back to Native Americans who boiled crabs, clams, and crawfish with cornmeal dumplings called “lumps” or “hush puppies.”

This dish became more widespread when settlers began boiling lobsters, shrimp, oysters, and other shellfish with potatoes and onion.

Tuna Steak Seasoning
What's a good seasoning for tuna steak? This recipe uses pickling spice for flavorful tuna steak, and it only takes a mere 3-minutes to make!Quick, rich in flavor, and delicious!
Check out this recipe!

Do you need to stir while simmering?

The answer is yes! It is important to stir this dish constantly when it’s being prepared in a traditional large stockpot because it contains many ingredients. Stir so that they all cook evenly and do not stick to the bottom.

If you’re using an Instant Pot, the magic is that there’s no need for constant stirring!

How long to boil shrimp?

After adding shrimp, you should boil it until the shrimp’s color turns pink. Usually, it’ll take only 3 to 4 minutes.

In the Instant Pot, the shrimp are added last because the pot’s steam will cook them. The potatoes are the main reason for the 8 minutes total pressure cooking time.

How much do you love this recipe?!

What do you think of this recipe? Have you ever made a low country boil? Leave a 5-star rating along with a comment below if you love this Instant Pot shrimp boil recipe’s time savings! 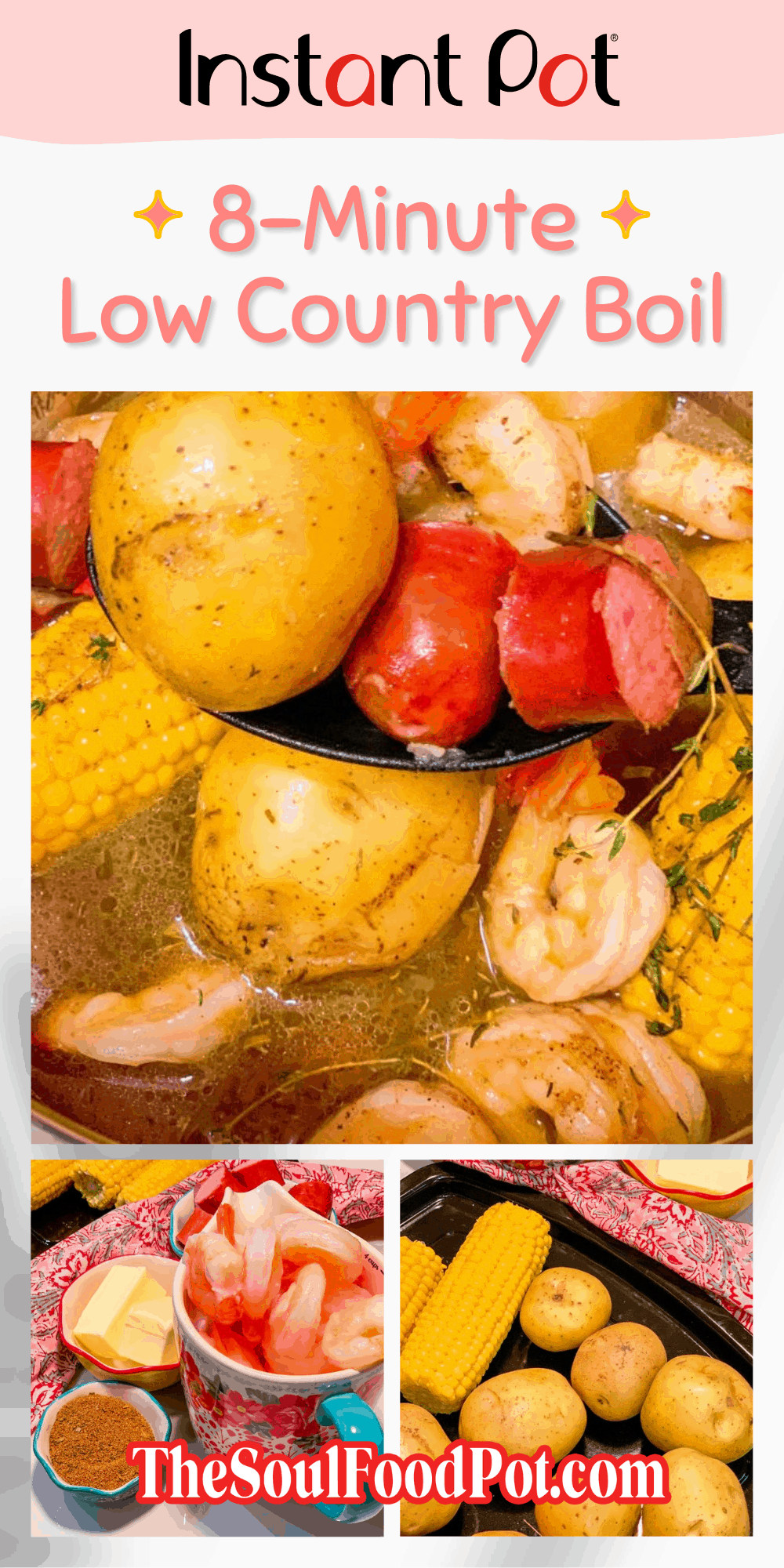 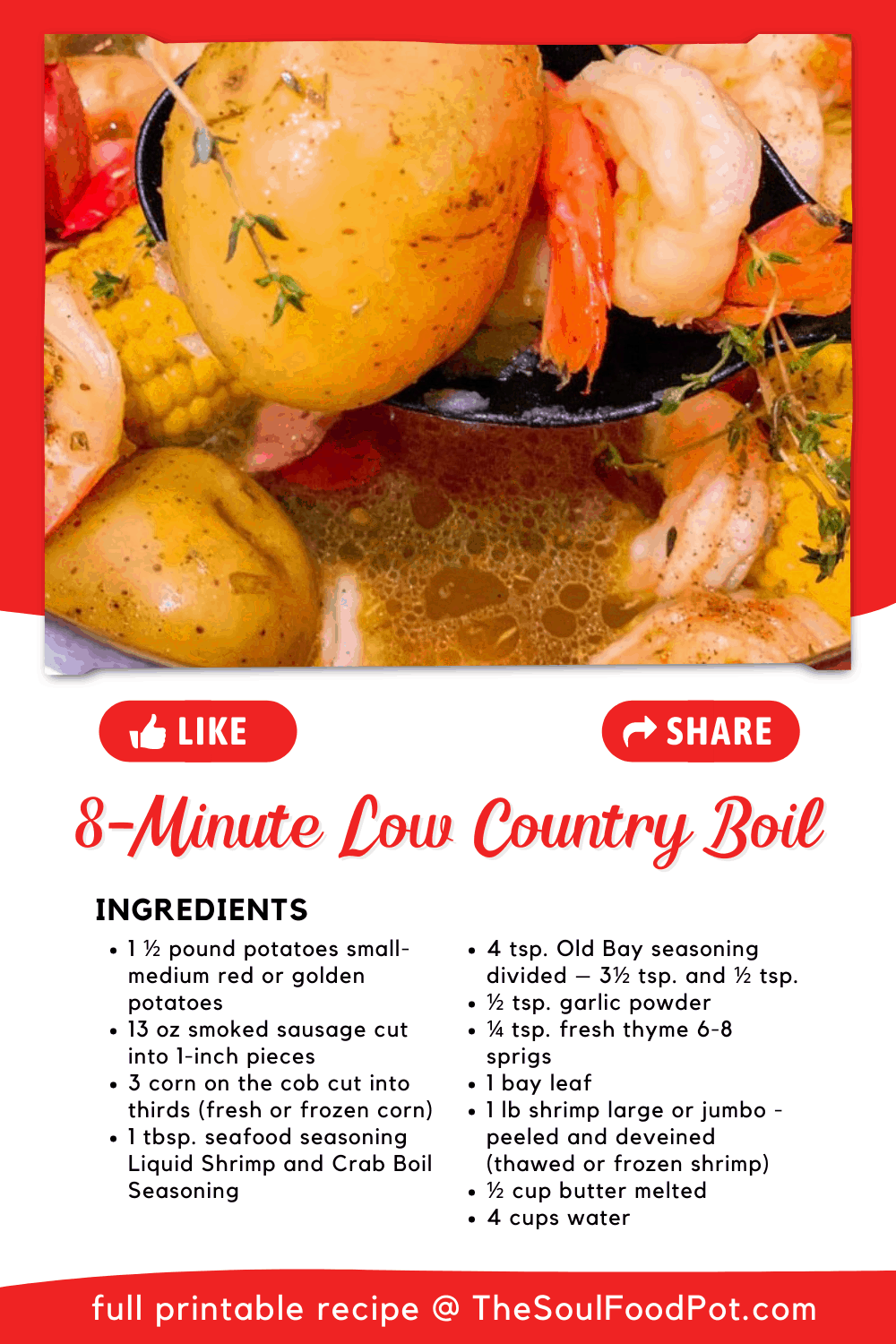