The Juneteenth holiday and Juneteenth traditions are celebrated on June 19th in the United States.

But you may be still wondering…

What is Juneteeth, how is it celebrated, and why does it matter?

The news was that the American Civil War had ended, and enslaved African Americans were free because President Abraham Lincoln signed the Emancipation Proclamation. 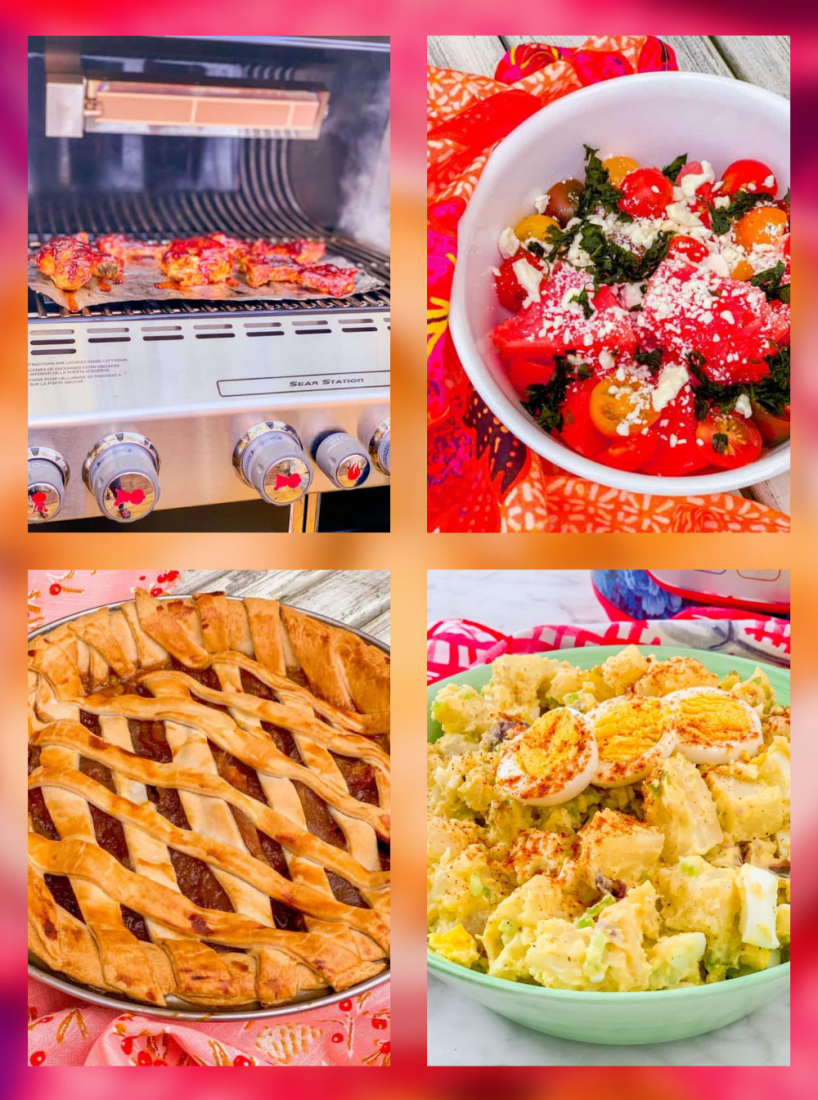 Why is it called Juneteenth Holiday?

The word is a combination of “June” and “nineteenth.” So June 19th, now a holiday, is the date the news of emancipation finally made its way to Galveston, TX.

What is the importance of Juneteenth?

The Juneteenth holiday is a jubilee day to celebrate African American freedom, independence, and heritage.

Even though the United States became a free country 87 years earlier on July 4th, 1776. Enslaved Black people weren’t freed on the 4th of July.

So you can understand why many in the Black community have a tainted view of America’s 4th of July Independence Day.

Juneteenth is a day of remembrance, a celebration of Black people’s freedom day, and a time to reflect on the vital role African Americans played in America’s journey to freedom and equality.

Juneteenth traditions remind us of our ancestors’ trials and tribulations before gaining equality and pride.

Juneteenth is the time to remember African American history, celebrate cultural accomplishments, and look forward to what we can achieve as a community.

Why is Emancipation Park important to Juneteenth?

According to Visit Houston Texas, Emancipation Park is a 10-acre public park purchased by four formerly enslaved people in 1872 and served as a location to celebrate Juneteenth.

Until the 1950s, it was the only public park and swimming pool in Houston open to African Americans.

The new Emancipation Park is designed as an interwoven tapestry of buildings and landscapes celebrating the park’s rich African American history. In addition, guests can enjoy revitalized landscapes and playgrounds in this memorialized space.

How is Juneteenth similar to Independence Day?

Juneteenth is an African American holiday celebrating the ending of slavery. However, it’s not the same as the 4th of July Independence Day, even with its patriotic aspects and celebration of freedom.

Juneteenth independence day is a more spiritual display of patriotism that focuses on African-Americans rather than the nation. 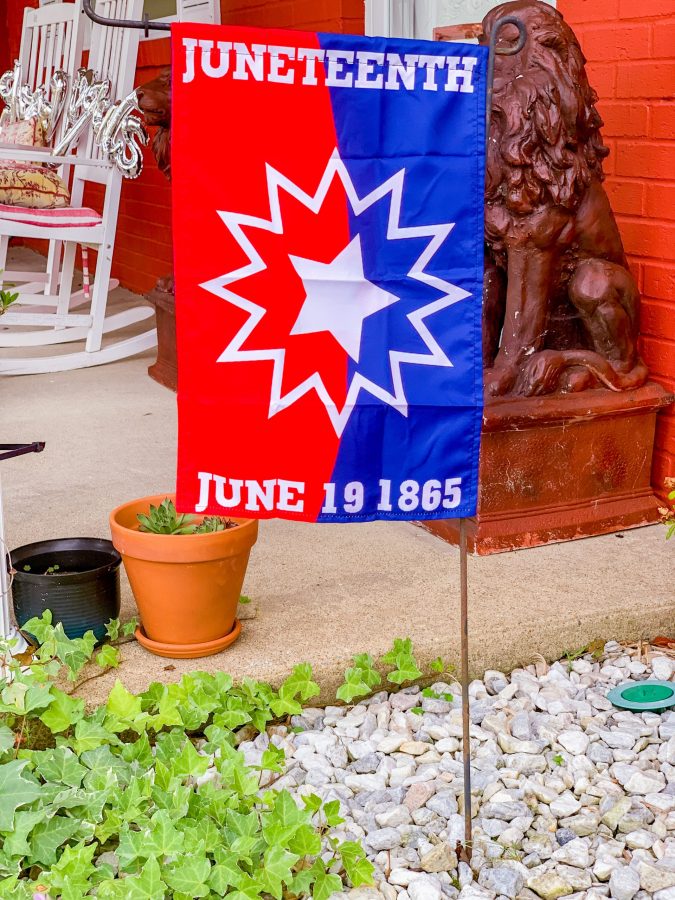 What are the official colors for Juneteenth?

The Juneteenth flag features three colors: red, white, and blue. It symbolizes the same colors found in the U.S. flag.

It shows that formerly enslaved people, and always have been, Americans. What does the zigzag shape around the star on the Juneteenth flag mean?

The bursting zigzag around the star represents a nova, a term that astronomers have adopted to refer to non-existent new stars that suddenly appear.

This image symbolizes the emergence of the African American people, who were once forcibly kept from owning the land they inhabited.

A representation of freedom, a new beginning, and a new horizon for African Americans in the United States. 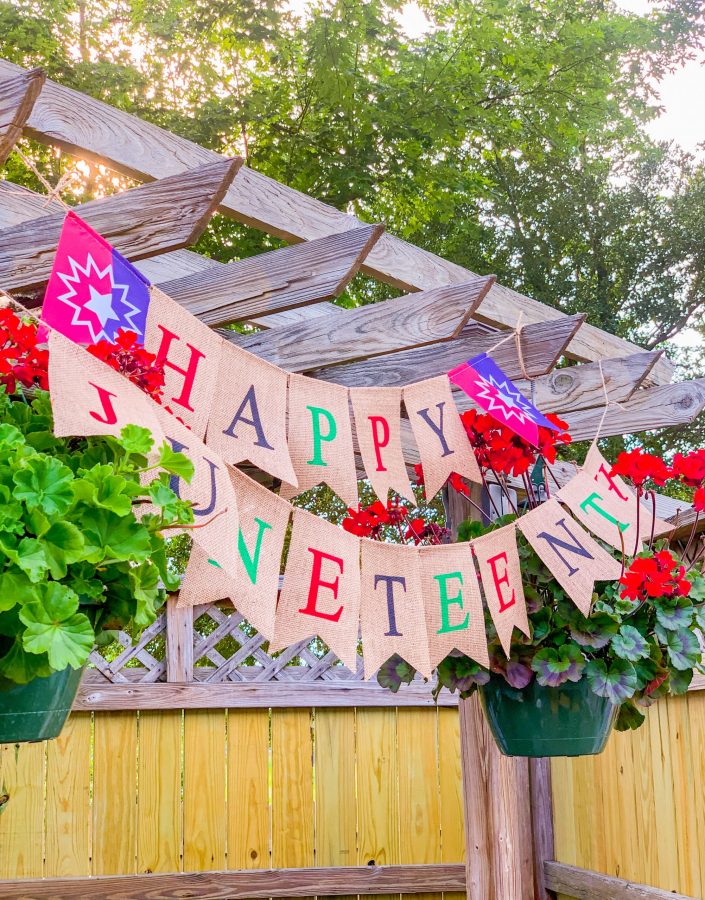 Why are Juneteenth colors also red, black, and green?

The official Juneteenth flag colors are red, white, and blue to represent that enslaved Africans and their descendants are Americans.

Many in the Black community have adopted the Pan-African flag colors red, black, and green (RBG).

What should you wear to Juneteenth?

The red, black, and green colors worn at Juneteenth events symbolize the blood, soil, and prosperity of all African people and descendants.

What type of music is played on Juneteenth?

Juneteenth is a celebration of freedom. A time to reflect and celebrate. You’ll likely hear celebratory and spiritual music at a Black person’s Juneteenth celebration.

Iconic artists like Nina Simone, Aretha Franklin, James Brown, and Billie Holiday. These artists created spiritual songs that were being sung in church congregations. But they were also activists for Black folks and equal rights, frequently recording songs about freedom and revolution.

Do you wish someone a happy Juneteenth?

At the heart of Juneteenth is a day to celebrate the journey and freedom of Black people in the U.S., and an excellent opportunity to acknowledge the many contributions that Black people have made to American culture.

So, while you can wish someone a Happy Juneteenth emancipation day. Even better, you can use the following tips for how to celebrate and acknowledge Juneteenth, including on social media. How do you celebrate Juneteenth? 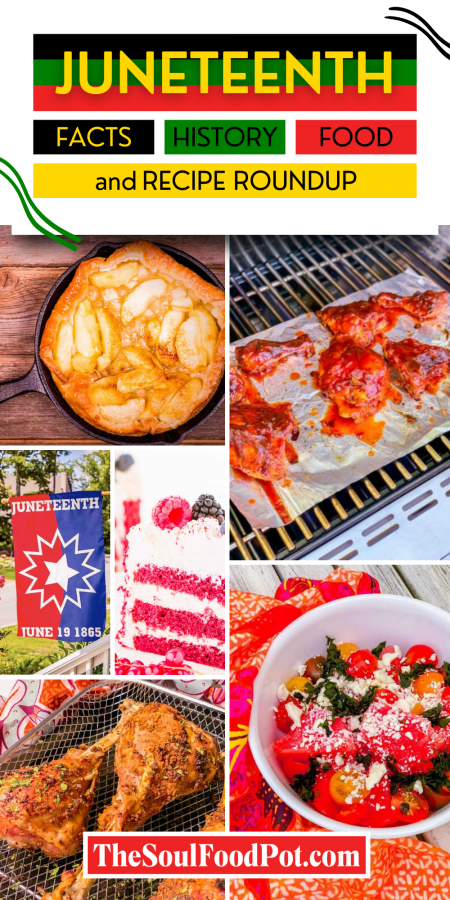 Watermelon is food stereotypically thrown on the doorsteps of Black people as a way to identify us.

But, of course, you know, African Americans didn’t invent watermelon!

Just like our stereotypical liking of fried chicken (which we also didn’t invent, BTW).

However, we do have a hand in creating delicious Southern watermelon recipes. (Similar to how we’ve perfected seasoning Southern fried chicken!)

So don’t forget to add tangy and sweet tomato watermelon salad to your Juneteenth traditions menu! 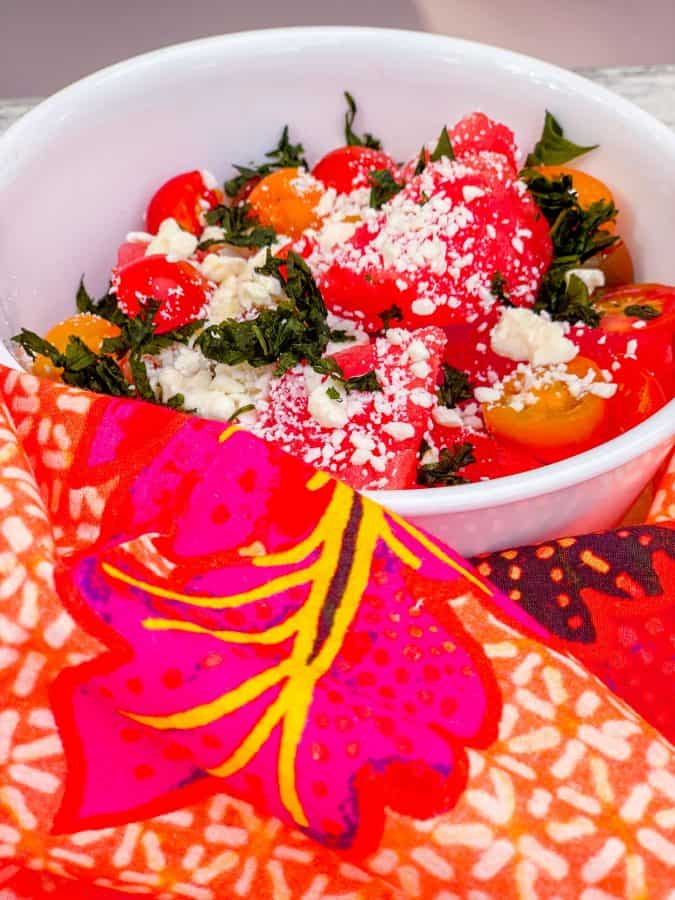 Summertime is all about refreshing flavors, including juicy watermelon and tangy tomatoes.

This recipe for tomato watermelon salad with feta cheese, pickled onions, pickled peppers, and zesty cilantro is a classy Southern dish, perfect for any occasion!

Ingredients for the tomato watermelon salad 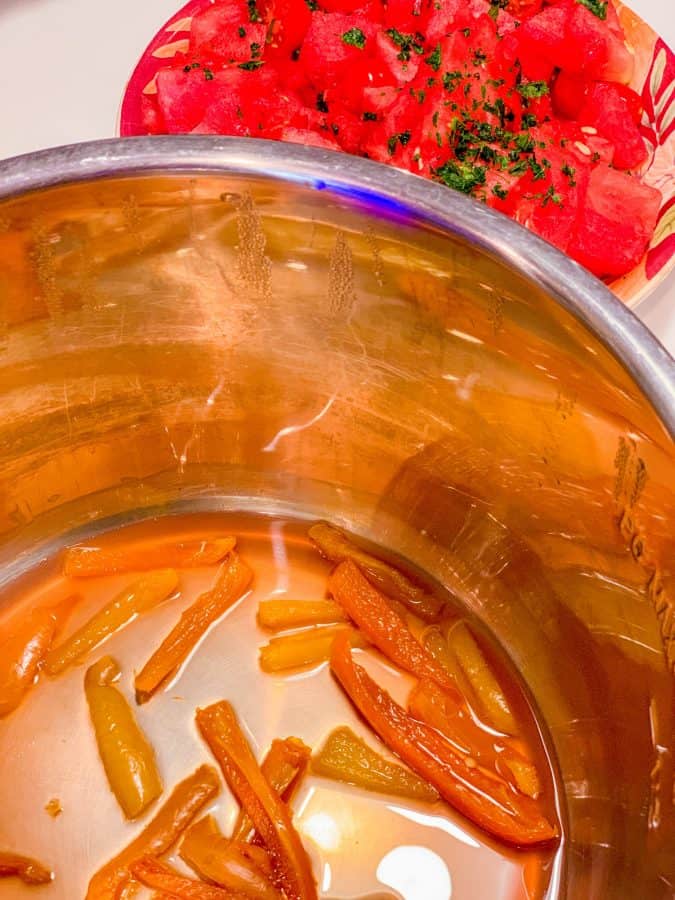 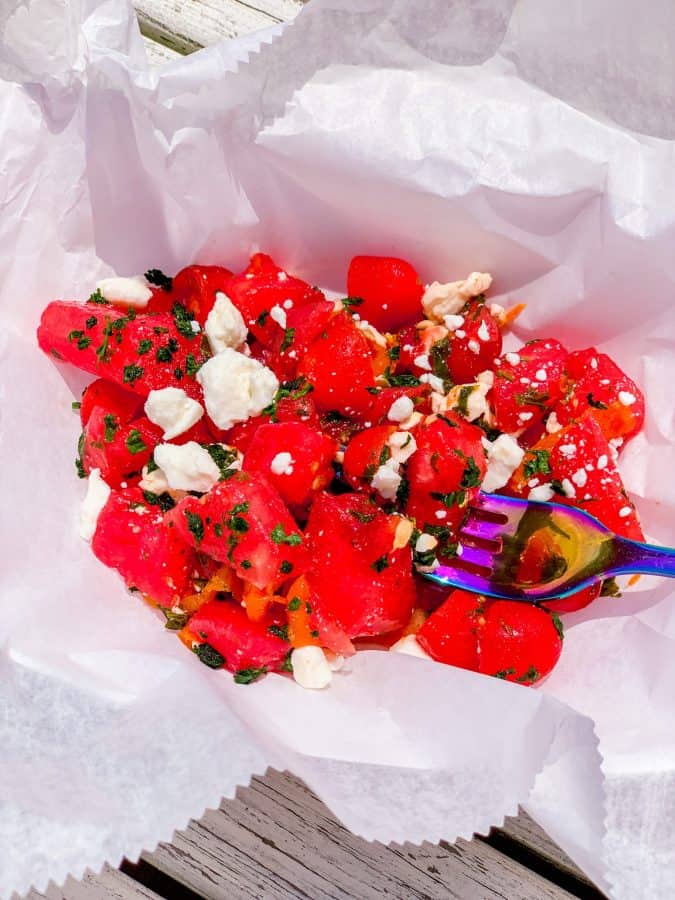 How did the American civil rights movement affect Juneteenth celebrations?

Juneteenth traditions and celebrations in the U.S. died out in the 1960s, eclipsed by the growing influence of The Civil Rights Movement.

In 1968, however, Juneteenth became important again as a day of empowerment to strengthen the Black community on its terms during the Poor People’s Campaign initiated by Martin Luther King, Jr.

In 1980, Texas officially became the first state to mark its return with a Juneteenth Texas state celebration.

Is Juneteenth a real holiday?

Now a federal holiday, Juneteenth is observed on June 19th. Thanks to the “Grandmother of Juneteenth,” Opal Lee, who launched her Opal’s Walk 2 DC initiative in 2016.

Lee wanted to walk more than 1,400 miles from her home in Fort Worth, Texas, to the nation’s capital to bring awareness to Juneteenth.

It took until 2021, when President Biden signed a bill for a Juneteenth national independence day. The same year the Black community received justice for George Floyd.

94-year-old Opal Lee was there to witness the President’s signing of the bill for Juneteenth. 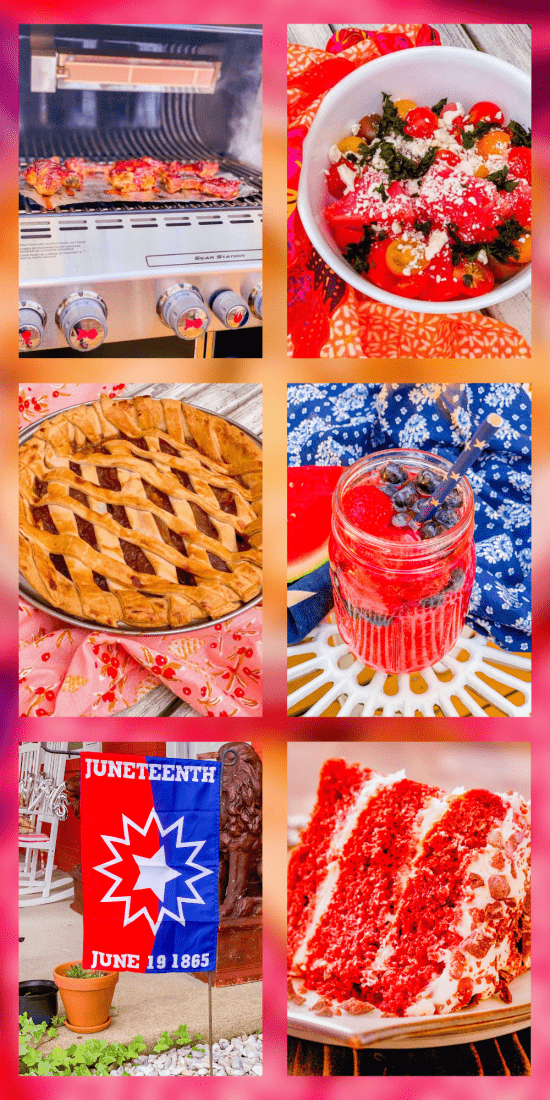 What is the official drink of Juneteenth?

What drink is synonymous with Juneteenth? The official drink of Juneteenth is red hibiscus sweet tea.

Hibiscus drink has West African roots, so it’s the drink at the heart of the Juneteenth traditions and celebrations.

Juneteenth Southern Hibiscus Sweet Tea
What is the official drink of Juneteenth? Southern hibiscus sweet tea. It's a delicious red drink, and hibiscus flowers are native to West Africa. So, hibiscus tea has been part of Black culture since the beginning!
Check out this recipe!

What does strawberry soda have to do with Juneteenth?

What is red soda water?

Red soda water is carbonated water flavored with either watermelon or strawberry as part of a Juneteenth feast! A beverage commonly served as part of Juneteenth cookout traditions. 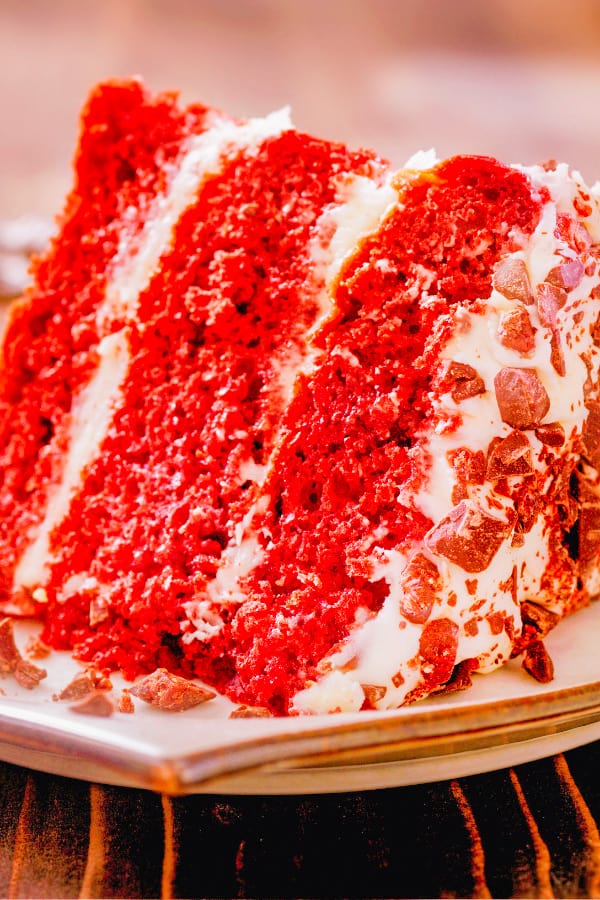 How is red velvet cake related to Juneteenth?

Red velvet cake is the official dessert of Juneteenth.

Its popularity was boosted during the Juneteenth red food celebrations due to its red color.

This cake has traditionally been served as soul food on holidays such as Christmas, Easter, Valentine’s Day, and even Memorial Day. So it doesn’t seem out of place to offer it on Juneteenth.

Red velvet cake is considered soul food of the South!

Like most Southern cuisine that originated in the 1800s, red velvet cake is believed to also be of African-American origin.

Why is red food eaten on Juneteenth?

While Juneteenth has grown to include celebrating African-American culture and heritage, Juneteenth red food and drinks have always been a part of the jubilee day festivities.

How red food and drink joined the Juneteenth feast

Juneteenth red foods are not only delicious, but they are also symbolic. Red is one of the primary colors used by African Americans to celebrate Black History. What does the red food and drink symbolize for Juneteenth?

Juneteenth traditions include a menu of red foods to honor the bloodshed of our ancestors during their journey toward freedom and equality.

So when you celebrate Juneteenth, include red foods for an official Juneteenth tradition.

What are 10 Juneteenth traditions red foods

Some Juneteenth traditional red foods include:

The Best Juneteenth Red Foods & Drinks
Juneteenth red foods and drinks are delicious & symbolic. Red is one of the primary colors used to celebrate Juneteenth Black History
Check out this recipe!

What are traditional foods for Juneteenth?

So what do people eat and drink on Juneteenth?

Here’s a short list of traditional Black folks’ food you can make for Juneteenth:

Southern Soul Food Pig Pickin Cake
What is a Southern soul food pig pickin cake? It's a homemade, moist yellow cake with whipped pineapple frosting, vanilla pudding & sweet mandarin oranges baked in. Pig pikckin is a one-of-a-kind cake as unique as its name and the official dessert of Southern pig roasts and pig pickins!
Check out this recipe!

How do you celebrate Juneteenth where you live?

If you’re celebrating Juneteenth in the city, remember these iconic soul food restaurants where you can eat!

The Best Juneteenth Menu Ideas & Recipes
Soul food favorite Juneteenth menu ideas from the main dish to the sides & even dessert. Red food and drink & what food to serve on Juneteenth
Check out this recipe! Or, if you’re celebrating Juneteenth in your hometown, make sure to include an iconic African American recipe based on where you live! 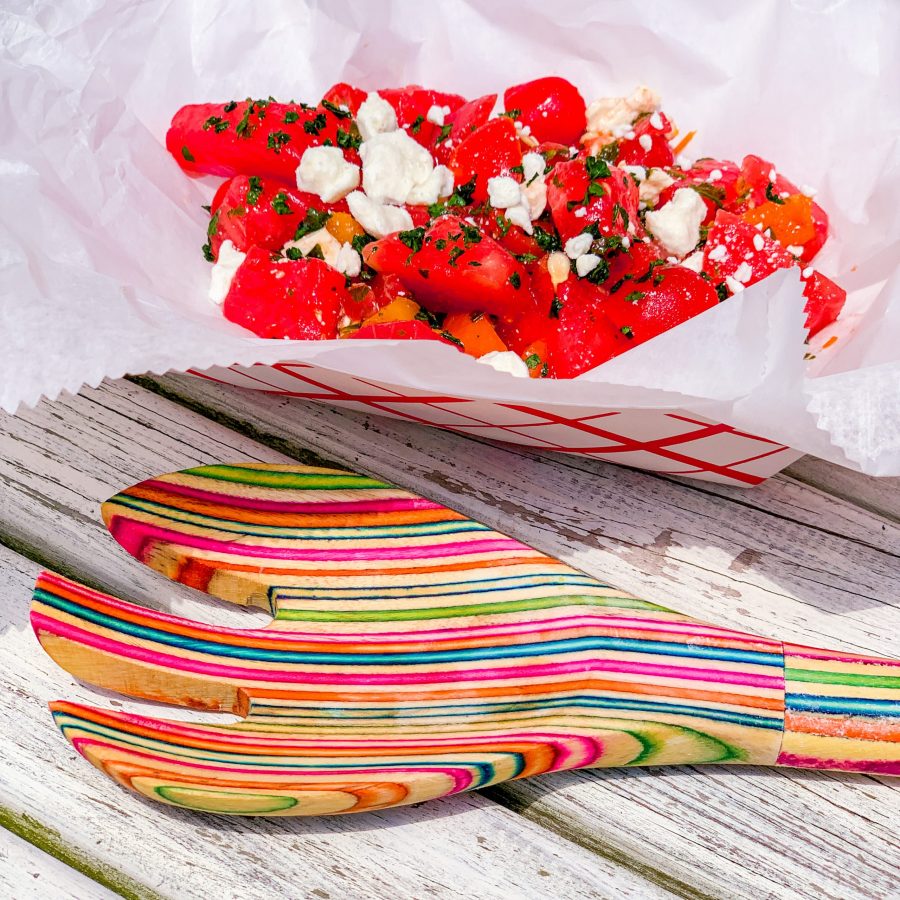 What do you think of these Juneteenth traditions and recipes?

Have you celebrated with Juneteenth food and traditions? Ingredients for the Juneteenth tomato salad 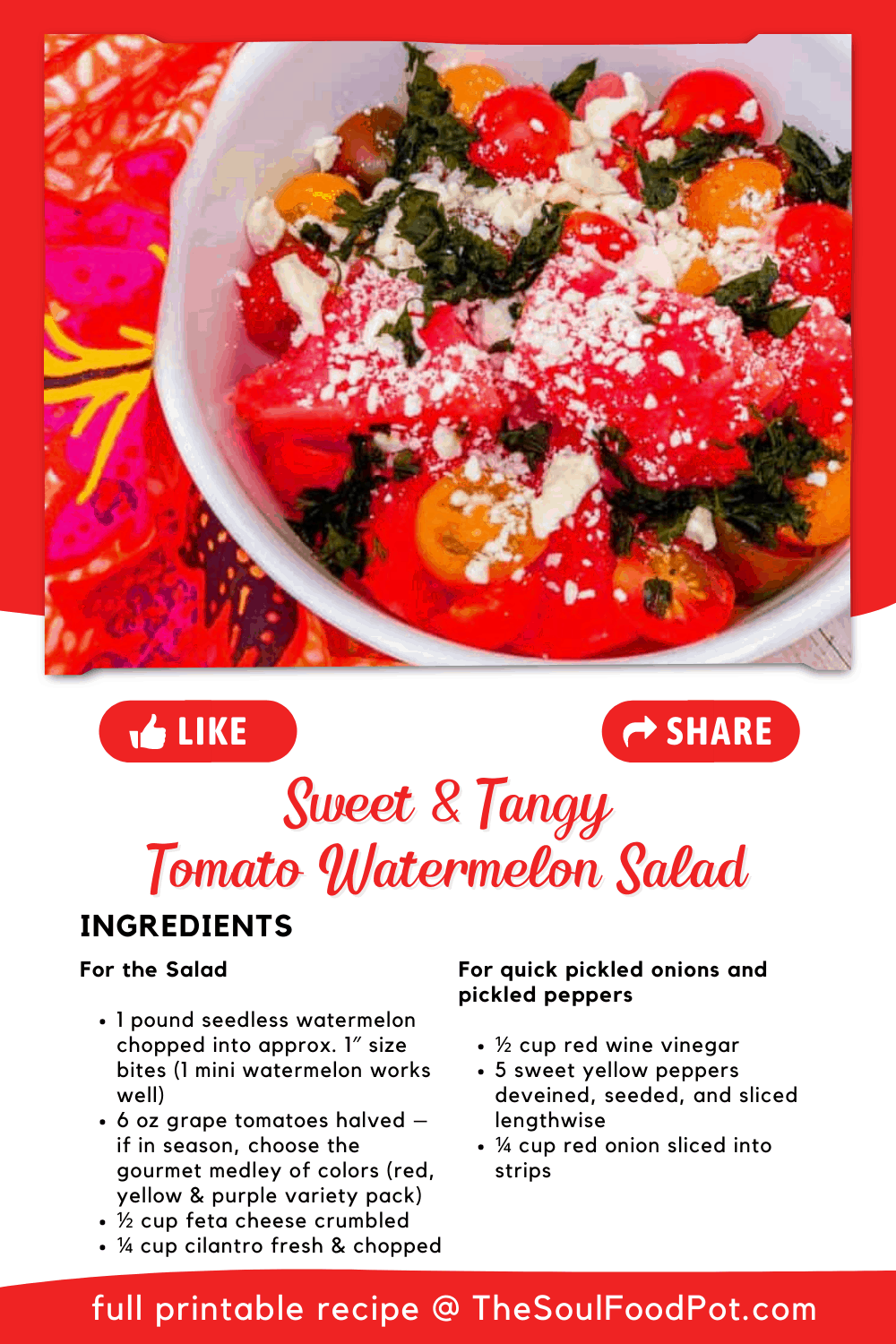 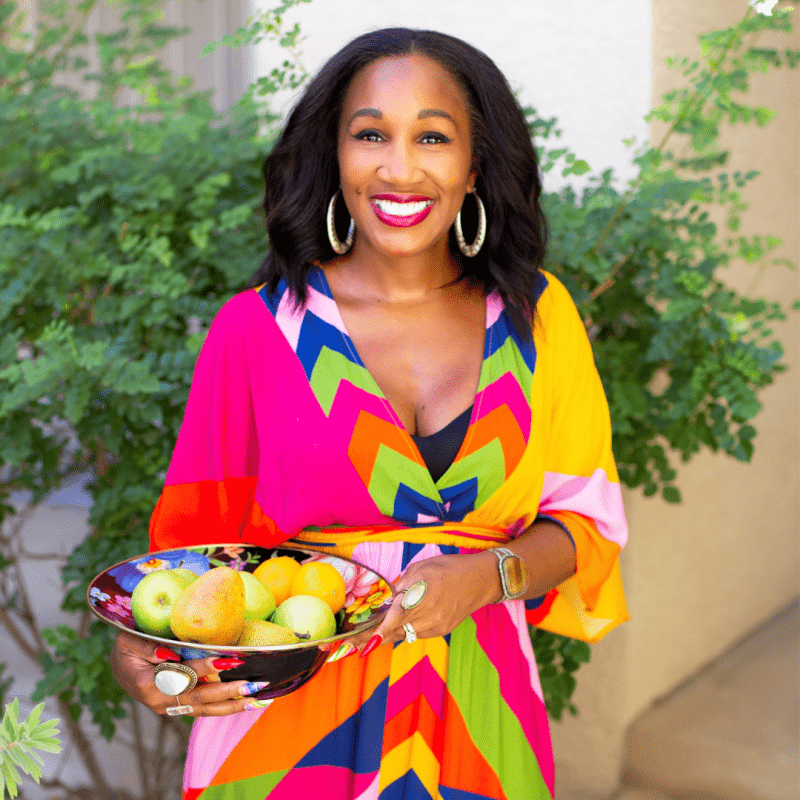